Another day, another misogynist fatwa…

Yesterday afternoon a document went viral all across the online news agencies and social media. The document is dated Sunday the 31st of October and in it is a fatwa and not just any fatwa, an official fatwa from the governmentally appointed committee for fatwas i.e. the highest council of our ultra conservative version of Sunni Islam. What’s so important that this committee would get together and issue a document and on the very same day release it to the press? Women, of course! A quick translation of the document:

This fatwa is issued in reply to the below question:

Several companies and shops are employing women as cashiers who serve both men and women as families. Each day these women cashiers meet dozens of men, and speak to them while handling back and forth money and receipts. In addition these women cashiers are required to undergo training, attend meetings and interact with their colleagues and supervisor at work. What is the ruling on women working as such? What is the ruling regarding companies and shops that recruit women? Please advise.

After study, the committee has come to the following reply:

It is not permitted for a Muslim woman to work in a place where they intermingle with men. A woman should stay away from places where men gather. She should search for employment that does not expose her to temptation nor make her a source of temptation. And what you have mentioned in your question does expose her to temptation and tempt men, hence it is Islamically prohibited. And the companies that employ women are collaborating with them in what is Islamically prohibited and thus they too are committing a prohibition. It is known that whoever fears God by leaving what God has prohibited and does what God asks of him, God will then facilitate his affairs, just as promised in the Quran (translation* verse 3/Al Talaq):

{And He provides for him from (sources) he never could imagine. And if any one puts his trust in Allah, sufficient is (Allah) for him. For Allah will surely accomplish his purpose: verily, for all things has Allah appointed a due proportion.}

And the Prophet PBUH said: It will not be that you abandon something for the sake of God, but that God will compensate with what is better for you. (my translation)

There is a glimmer of hope here though. First off, this council, throughout its history, has prohibited things that remain legal, such as music and satellite TV channels that are not Islamic. So this fatwa might join the list of things that Saudis feel unwarrantedly guilty about but still do. It would be a shame if another door closes in the faces of women who are in desperate need of jobs.

A scan of the document: 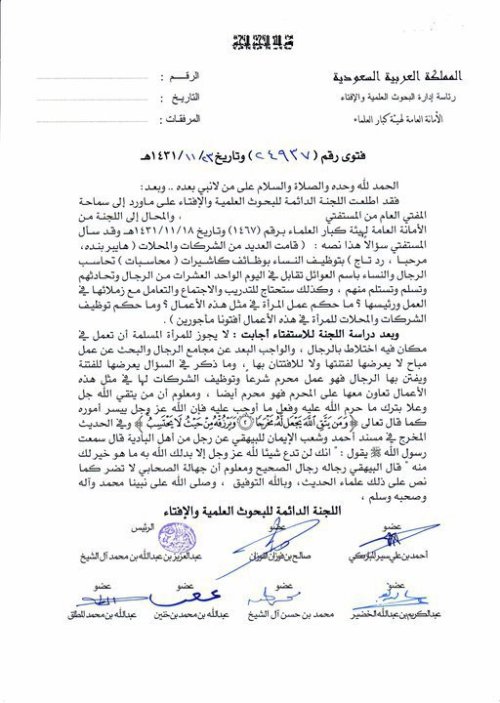 63 responses to “Another day, another misogynist fatwa…”