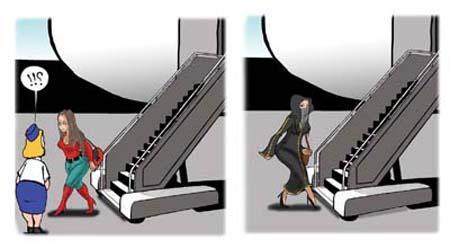 In a country where you get an eight years prison term for torturing your daughter to death while another gets a ten years sentence for dancing naked in the street, it’s safe to say we are conformists. That’s why there is no experience like that of being on an international flight outbound from Saudi. The people you get off the plane will look completely different from those who got on. While most women in Saudi wear the niqab and most men wear a thobe, these magically disappear once the plane crosses Saudi borders. Most of the women who get off at the end of the trip will have their faces uncovered and many will not even have their hair covered now that they are safe from the conformist claws of Saudi. This duality is so integrated that it’s second nature to most. 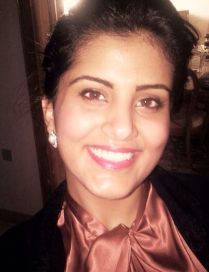 That’s why being an individual in Saudi is a ginormous feat that has surprisingly been accomplished by a young lady, Loujain Al Houthloul. And like everything that Al Hathloul does, her first appearance in the Saudi collective consciousness caused a commotion. She posted a Keek video where she not only appeared with her face and hair uncovered but also addressed the fact openly by making fun of ultra-conservatives and defyingly saying that she won’t ever cover. The video instantly went viral and had such a huge impact that she deleted it from her Keek page. Yet it was too late. The video had been downloaded and sent over every social media format in existence. Once the 24 year old French Literature undergraduate got her second breath and adjusted to the attention, she stood her ground and posted several more Keek videos. When racists started to try to put her down by spreading a rumor that she’s originally from India, she responded in a Keek video that she would be proud to be Indian. Others tried to “tame” her through attempting romance and marriage. One guy publicly offered her a million and a half Saudi riyals for her hand in marriage.

She currently has over a 150,000 followers on Twitter, 92,000 on Instagram  and over 670,000 followers on Keek. I’m also betting that there are thousands of Saudis who probably check her accounts on a daily basis but don’t follow her so as to not encourage her.

When we at the October 26th Campaign were looking for a celebrity to announce the campaign, we contacted people who we knew were pro women driving. They all refused because they feared that they would lose followers, fans and might have trouble at their places of work or study. Then someone suggested Loujain and we contacted her. When we explained the campaign to her, she instantly and boldly agreed to announce it. Then an hour later, she contacted us again. I thought she was going to back out like the others but instead she asked if she could add her own take about the injustice of the driving ban to the announcement. I officially fell in love with her right then and there.

The next day she posted the Keek video and within 15 minutes it was viewed by over five thousand people and we could safely say that the October 26th Campaign had started. She had nothing to do with the idea of the campaign before her announcement and little to do with it after. However she received the brunt of women driving opposers’ attacks. Many assumed that since she announced it then she must be the person behind it. She got everything ranging from death threats and insults to false rumors of her arrest and ban from travel. Instead of backing down and staying in Canada where she was studying, Loujain booked a flight home to Riyadh and then drove herself from the airport while her father filmed her. Then she posted the video. It drove the opposers crazy! So crazy that the Ministry of Interior called her father in and made him sign a pledge to not allow her to drive again. It got so bad that her great uncle was pressured into releasing a statement renouncing her actions. Despite all of that she still stands her ground and to this day tweets and plans to post videos that go against Saudi duality. I don’t care how cliché it is, she really is like a breath of fresh cool air in this hot desert climate.