Sixth of November at the Riyadh Book Fair

Today at the Riyadh Book Fair, Dr. Aisha Al Mana and Dr. Hissa Al Sheikh sat down to sign their book documenting the first demonstration to lift the ban on women driving on November 6th, 1990. Dr. Madiha Al Ajroush was there too with her camera and was kind enough to share the photos she took here. Dr. Al Ajroush had participated in the 1990 demonstration and is the only Saudi woman to take part in every single demonstration and movement to lift the ban on women driving since the first one. She’s also a renowned photographer who has at this year’s book fair an aisle named in her honor.

I’m currently in the process of translating the Sixth of November book. Scroll down to read a sample of the book in English.

Dr. Madiha Al Ajroush under the sign for the aisle named in her honor. 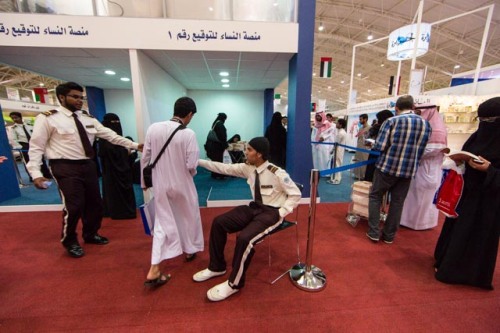 Security guards make sure that book signings are gender segregated.

A view of the crowd lining up to say hello and get their books signed.

Sample from the book:

At around 2:30 in the afternoon of November 6th 1990, a good crowd of women started showing up at the parking lot of the Safeway supermarket. Some were driven there by their drivers and others were driven their by their husbands or sons. Once at the parking lot, the chauffeurs, husbands and sons relinquished the cars to the women. The number of women outnumbered the number of cars available. There were forty-seven women and fourteen cars taking part in the demonstration. Not all of the women knew each other and some had never met before that fateful day.

Every woman with a valid driving license obtained from abroad assumed the driver’s seat in each car while the other women got in the passenger’s seats for support. As the prayer call for the afternoon prayer began, the women started their cars. Their husbands, sons and drivers stood in the parking lot, in silence, watching. The simplicity and justice of the movement lent it a reverence that enabled the women to trust in each other and have the courage to act together in their shared cause.

The women started driving their cars one after the other. At the head of the demonstration was a car driven by Wafa Al Muneef followed by another driven by Dr. Aisha Al-Mana. They started on King Abdulaziz street and went on to Ouroba street and then took a left onto Thalatheen Street. The stop lights slowed some of them down. The cars at the beginning of the movement would every once in awhile slow down so that the cars behind could catch up, as they had decided that they would stay together. The scene drew spectators both pedestrians and other car drivers. They stood in shock and disbelief but did not interfere with the procession.

Emboldened by the fact that the police had not stopped them or paid them any attention, the women at the head of the demonstration decided to drive another round. It was at the beginning of the second round that the police finally intervened and stopped the women. The police stopped the women’s cars one by one in a line against the pavement in front of The Riyadh Palace Function Hall on King Abdul Aziz street. The presence of members of the Commission for the Promotion of Virtue and Prevention of Vice (Religious Police) shortly followed the appearance of the police.

The first thing the policemen did after stopping the demonstration was to ask the women to produce their driving licenses. One woman quickly handed over a valid driving license she had obtained from the U.S.A. Faced with this awkward situation, the perturbed policemen called for their superior who arrived just as the members of the Commission for the Promotion of Virtue and Prevention of Vice did. The Commission members requested that the police entrust the women and the investigation over to the Commission. The women opposed the idea completely and the police refused as well.

20 responses to “Sixth of November at the Riyadh Book Fair”