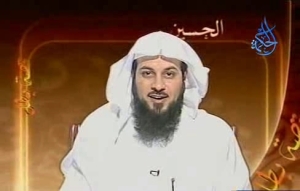 Mohammed Al Arefe is the complete package. He is the Brad Pitt of Sheikhdom. Unfortunately he truly puts women in the toilet when it comes to their rights and humanity. His ideology is the typical close-minded outlook that Saudi society has grown accustomed to from its religious leaders, except when it comes to this particular religious leader, it almost seems like he has hypnotic super-powers. Even women will accept being told that they are less than men when it comes from his mouth. He is very charismatic. And I believe it comes across even with language barriers. This is a short video of him telling a funny story about his seven year old daughter learning her daily prayers.

Rough Translation: In the video he says that he is trying to encourage his daughter Jumana to pray. So one day he told her to pray the thahir (noon) prayer, she with resignation said ok. On his way back from performing Asir (afternoon) prayer at the mosque, Jumana opened the door for him and he asked her if she had prayed that prayer. She replied oohhh not again. Do I have to? But she goes and does it anyway. Then on his way back from the next prayer, the Maghreb (sunset) prayer, she again opened the door for him and immediately laughingly says OOhhhh you’re killing me with all this pray pray pray …

Some of the issues that he has raised was his objection at the first National Forum to the women who drove in 1991. That they should not have been allowed to resume work and influence other women, especially the participants who also happen to have teaching posts at schools and colleges.  He also proposed that a rule or law be established so that liberal women would not be able to take advantage of their jobs as teachers and lecturers to spread their sinful ideas. And that those teachers would be strictly instructed to teach what is in the books and not their opinions and views.

He is also extremely well-travelled. He hops from one country to the next giving lectures at mosques and even has debate type of sittings with priests and leaders of other religions. I attended one of his lectures at a mosque in Birmingham, UK. Of course he sat in the men’s section and women could only hear the lecture on the sound system. In the lecture he spoke about how to deal with teenagers that are raised in the west and have been westernized. Throughout the lecture he completely ignored women. He gave advice only to fathers and spoke only about problems with sons. As though mothers had no say or effect and there was no fear about daughters being westernized.

Here’s another video of him speaking on how to beat your wife. It already has English subtitles.

If only whatever changed Sheikh Salman Al Ouda would change Sheikh Mohammed Al Arefe it would probably be the last straw that breaks our ultra conservative camel’s back. With his huge following here in the central region, he is a man with a lot of power to either keep us on our crazy path or get us to see the light.