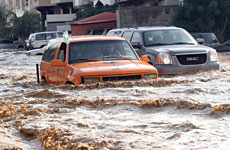 Heavy rains in Jeddah the past couple of days have claimed 78 lives and still counting. Heavy rains led to flooding because of how the city is managed. Millions go into its infrastructure for digging sewers and putting in pipelines and paving roads but by the time the money finally trickles down to the purchase of material and hiring contractors, it doesn’t cover the costs anymore. For the past few years the people of Jeddah have been complaining and grumbling about it. This just might be a blessing in disguise with the Hajj spotlight on the area it might be enough of an embarrassment that something actually gets done. I propose that the king hand over the Jeddah municipality to ARAMCO as he did with KAUST when it became apparent that officials were skimming the budget.