On the 7thof July at 2am a young Saudi family was taking advantage of the cool night air at a public park in a small town, Baljarshi, Southwest of the country. According to AlRiyadh newspaper, Abdulrahman loaded his family into his car to head home and started playing Arabic Islamic children songs on the car stereo. The PVPV came up in their huge GMC and ordered him to turn down the music. Witnesses say that there was a back and forth between him and the five members of the PVPV. Abdulrahman decided to ignore them and drove off. The PVPV responded by giving chase with the assistance of their accompanying  police patrol car. The chase went on for 4 kilometers until they reached an overpass that was still under construction where Abdulrahman lost control of the car and went over the edge. Witnesses say that when the family went over the edge, the PVPV and the patrol car panicked and fled the scene instead of assisting.  Abdulrahman passed away at the accident site. His six month pregnant wife had her right arm completely smashed and is currently under threat of having it amputated. Their six year old son, Khalid, is in the ICU with internal bleeding and a head injury and their four year old daughter, Dorar, is in stable condition with a few broken bones. A life lost and a whole family  ruined because of a little music on a car stereo. 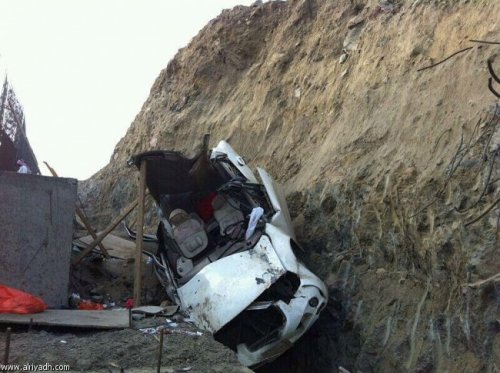 Abdulrahman’s car at the site of the accident

When the news broke out muttawa PVPV sympathizers came out of the woodwork fabricating stories about how Abdulrahman was actually going through a police checkpoint and didn’t stop or was uncooperative and the police were the ones to chase him while the PVPV only came upon the scene after the accident. However the governor, Prince Mashari bin Saud, ordered an emergency committee to investigate what actually happened. The committee announced yesterday that the accident was mainly caused by the PVPV members and their accompanying police patrol car and secondly by the road construction company. This of course isn’t the first time that PVPV members have caused the death of innocent civilians due to their fervent enthusiasm for a moral society. Some of these deaths can be read about here and here. I’ve also written here on the blog about deaths, stabbings for showing pretty female eyes via a slit through the face cover…etc.

The new head of the PVPV has tried to rein in his overly eager employees and even issued a complete ban on car chases a few months ago. Honestly I can’t see the sense in that, considering you have fanatically religious young men with the conviction that they are doing God’s work on Earth and saving the souls of their fellow citizens from sin being equipped with state of the art jeeps, GMCs and surveillance devices. They are then divided into pairs and groups of three and four. They are also accompanied by an armed police officer. It would take a lot of self-control and will-power to not chase people who resist moral guidance given the whole structure, provisions, mission statement and attitude of the PVPV. If  Al-Shiekh is truly serious about making the PVPV more civilian friendly, he would look into how they go about their work. If they are to have their GMCs and surveillance than they should be given real police training and of course start dressing in a uniform. But if they are going around in their Islamic thobes and cloaks and are here to simply advise and provide guidance then why are they provided with all these serious man-toys?

It’s hard to think of something positive to end with after the news of a death over something so stupid but remember when the nail polish girl insisted on her rights in the mall a month ago? The religious establishment with the blessing of the government has ensured that every average citizen is fair game when it comes to personal beliefs, clothing and behavior. Add to this the widespread and widely accepted method of proving your own personal faith through the harassment of others in the name of moral advocacy and you get a society where it’s easier to just give in and suffocatingly obey.

I’m very happy to report that a new discourse of asserting your rights and giving others theirs has started to take over the younger generation of Saudis. An example of this is this video where two Saudi men openly state when asked their opinion on if women should be allowed to drive that the real question is why is the government treating citizens like children or dependents by even considering such a ban never mind implementing it. The way the two argue their opinions shows how the terminology and the dialogue has changed from what it was only a few years ago.