If I could describe Madeha Al-Ajroush in one word, it would be pertinacious. She is the only Saudi woman to take part in all the protests against the women driving ban since the first one in 1990 and right up to the most recent October 26th Women Driving Campaign. 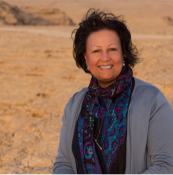 She has always been consistent in that all human beings deserve respect and the freedom to live with dignity. Al-Ajroush worked with Prof. Hessa Al Shiekh to initiate what today is known as the Family Safety Program. They had to secede because they were insistent on it being a nation-wide program that not only provides support for domestic abuse victims but also trains and holds the police and courts accountable for how they receive and treat these victims. Over the years Al-Ajroush has had several occasions where anyone else would have capitulated to governmental and societal pressures. She has had her house raided by investigators, she was banned from travel, and she’s been fired. All this because of her outspokenness for women’s rights.

During her spare time, Al-Ajroush has managed to create one of the first private therapy practices in Riyadh and probably the only one that specializes in gender orientation. She has also published three photography books. I was lucky enough to assist in translating her latest book, reSURFACE. In this book, she showcases pictographs of women in Saudi that date back thousands of years. Many of the petroglyphs included in the book are from the UNESCO World Heritage site of the Hail Region. Others are from all around the Kingdom. These petroglyphs are evidence that women were not always relegated to the proverbial backseat. The women are depicted as deities, queens, and dancers. Besides the gorgeous and provocative photographs that fill this book, it also includes accounts of the challenges and surprising hospitalities Al-Ajroush encountered in reaching these desert caves and mountains.

Next week Al-Ajroush will launch her book at Alãan Artspace in the heart of Riyadh. You can hear her in person talk about the book and what it took to get it from a dream to reality in this misogynistic desert nation.