Thursday was the last day for candidacy registration in Saudi Arabia. Don’t get too excited! The elections are only for municipal council seats. But it’s still a start. This is the third round of municipal elections in history and 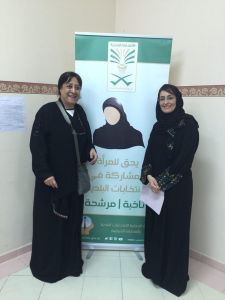 the first to allow women to vote and run. The inclusion of women is not the only progress. This round, the municipal election winners will be a bit more than the nominal seats they were in the past and will have a little more say in the budget and performance of the municipalities. For example, in the past the head of the municipality is also a voting member of the council. It doesn’t matter which way he votes or even if he abstains because the ultimate decision is made by his office once the issue leaves the council. However, this time around, the heads of municipalities are no longer council members and only a non-voting coordinator from the head’s office is allowed to attend. Other changes include lowering the age requirement to eighteen and raising the educational requirement of candidates from literate to a high school diploma. Also the number of elected versus appointed council members has changed. Instead of half elected and half appointed, now it will be two-thirds elected and one-third appointed.

Many have expressed that participation in these elections is futile. They point out that previously elected officials have not had any real impact. Others claim that many of those that were elected, were voted in for reasons other than merit such as tribal and religious affiliations. 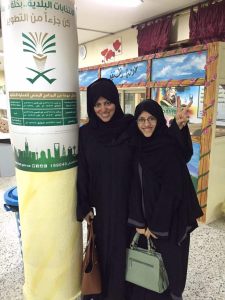 This has also been evident in the current election with Shiekh Al-Mutlaq, member of the Saudi Highest Islamic Council, telling people that they should vote for their relatives regardless of merit unless those relatives release them from the obligation. However, others are more farsighted including the Municipal Affairs elections spokesperson, Mr. Jadeeh Al Qahtani, who told Al-Riyadh newspaper that the experience gained from the elections will enable the country to conduct any type of elections. And he’s right. After this round, the country will have 35 thousand Saudi men and women across the country who are trained to conduct elections. A million and twenty thousand men are already registered voters from the previous two elections. In this third round, there were over half a million new registrations. Overall, there are 1,750,149 registered voters, with women making up 22% of the total. Nominations for the seats ended yesterday with 16% going to women nominees. Some areas have released their numbers:

The small number of women voters and nominees is partly due to difficulties in registering including the fact that they will be arrested if they drive their own cars. Some of these difficulties were eloquently explained in an article by Maha Akeel. Other difficulties include the prohibition on civil societies and political assembly. Civil societies are illegal and Saudis who create them face legal consequences. For example, both Waleed Abu Alkhair and Dr. Mohammed Al Qahtani are currently serving long prison sentences for starting nongovernmental organizations that promote and advocate human rights. Women participation in the municipal elections had their own government independent advocates; Dr. Hatoon Al Fassi and Fowziya Al Hani started the Baladi Initiative to advocate for women participation in the municipal elections in 2010. A year later, King Abdullah decreed that women will take part in elections. The Baladi Initiative since then has worked on raising awareness about the importance of women participation through lectures, workshops, and media appearances. ْ

Unfortunately once the elections were coming up, these efforts were abruptly stopped by the Ministry of Municipal Affairs. The Baladi Initiative had started workshops for women who planned to run and for potential women campaign managers. The workshops were free, open to all and planned for all the major cities. As soon as the first one began in Riyadh, the Ministry issued a statement that anything pertaining to the elections has to be either run or licensed by the government. And since the Baladi Initiative is non-governmental then all of their lectures and activities became now illegal. Fortunately this did not discourage these bold women. Since they could not do anything on the ground, they took their movement online. They do interviews on TV to encourage participation and used social media to get the word out.

Sahar Nasief, author and activist, and her mother

Many influential women also had their photos at registration taken and posted to encourage other women to do the same. Some of these leading women’s registration photos are included in this post. If you click on a photo, it will take you to either their Twitter profile or an online bio.

There weren’t that many objections to women participation. Sheikh Abdulrahman Al Barrack issued a fatwa that women’s participation is prohibited. However this is the same sheikh who issued an earlier fatwa claiming that Muslims not adhering to and believing in gender segregation are apostates who should be killed. So far, no one has been executed. He also called soccer the “mother of all sins” and a “Jewish conspiracy against Muslim.” Yet soccer remains the country’s national and by far most popular sport. Others from the religious establishment took a more politically savvy approach. Sheikh Abdulaziz Al Fowzan encourages good Muslim women to run for seats in case a female quota is implemented. This is so “deviant” and “westernized” women do not get any seats. However, if there is no quota then Sheikh Al Fowzan states all devout Muslim men and women should vote for men. Thus no woman gets a council seat. Three videos came out and were widely shared on social media and Whatsapp calling on all “morally vigilant” men to register for the elections to ensure that no women are voted into the councils. The most telling part about these videos is how men and women are represented graphically. The men are portrayed singularly and hold their heads high looking straight ahead while the women are covered, in groups, in profile and with their heads bowed down.

So far there has been little indication that people are acting upon the religious establishment’s advice. There were a few minor reports of vandalism at locations for women registrations but nothing serious.

Considering that this is the first time for women to take part and how new Saudis are to the whole democratic process, it’s so far been an auspicious start for the future of political participation in Saudi Arabia.