What’s in a name?

Shhh! If you are a Saudi male please pretend that you do not know that my name is Eman daughter of Fahad Al Nafjan. I’m um Sulaiman (mother of Sulaiman) to you. Apparently it is still a huge embarrassment for the male part of our society to know each other’s female relatives’ names. Little boys get into fights at school that start because one boy informs others the name of another boy’s mother. It is so bad that a Saudi from Jeddah sued a car company this week because they sent an exhibition invitation to his wife with her full name on the outside of the envelope. He claims that they dishonored him and his wife by making her name public. All over Saudi, you can find mosques that are built in the name of mothers, since it is considered a great Islamic deed to build mosques. These women pay for these mosques to be built but have to name the mosque in their firstborn son’s name so as to not shame the family by putting their name on a sign.  In Al Waha district in Riyadh there is one of these mosques called um Khalid Al Baltan Mosque. I’ll try to get a picture of it tomorrow morning on my way to work. And here it is: 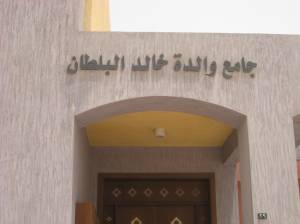 A while back, a new law was issued that stated that small businesses had to have the name of the owner on the sign. I would love to know the number of businesses that suddenly changed ownership or closed down just to avoid putting the name of a Saudi woman on a sign. I know for sure that there were rants about it for a long while in newspapers.

And just like almost everything else, we contradict ourselves. King Abdulazziz, the founder of Saudi Arabia used to esteem and revere his sister Nora. He had talked about her by name in many of his official meetings. It’s said that he used to go to her for advice and even sent his children to her when he need help in disciplinary issues. The prophet Mohammed (PBUH) too used to mention his wives and daughter by name in several of his hadeeths. You would think that Saudis would look up to these two men and try to emulate them but that is not the case.

I bet you’re asking yourself, what if a woman does not have a son, what name does she put after the um (mother prefix). If she has never been married, then nothing and it is not that big of an issue to call her by name. If she is married and does not have a son, she either uses her firstborn daughter’s name or uses her father in law’s first name, the latter being due to the Saudi convention of naming the firstborn son after the paternal grandfather.  The worst would be if she were divorced and childless, in this case, she is nameless and invisible.